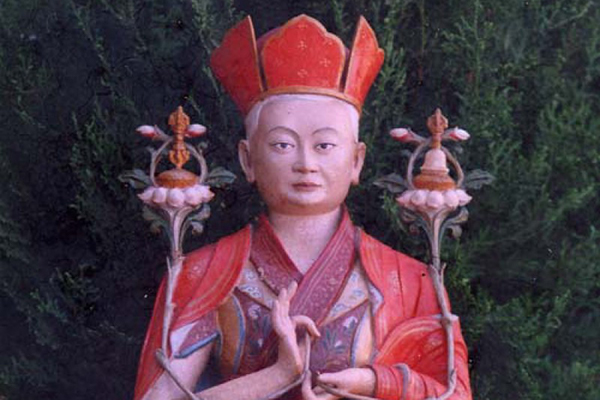 The fifth Kyabje Gyalwa Dokhampa, Drubgyu Nyima was born in 1781 in the Kokha region of western Tibet. He was enthroned at the age of five at Khampagar Monastery. He was ordained as a Bhikshu by the Regent of the 7th Dalai Lama. Drubgyu Nyima received many teachings from the 8th Dalai Lama. He also went through intensive philosophical studies.

The 8th Dalai Lama awarded him with a letter praising his unique and remarkable work in both the religious and cultural fields. Besides being a highly realized teacher and philosopher, he was involved in many activities for the welfare of the Tibetan people and brought peace and harmony to the warring tribes of his time.

It was with his guidance that the Nangchen Tsepchu Monastery was established which became the seat of Trulshik Adeu Rinpoche and the head of all the Drukpa Lineage followers in Qinghai. His students were numerous and among them was the 6th Dorzong Rinpoche Konchok Choegyal. The fifth Gyalwa Dokhampa passed away in 1847.